After three successful weeks on the European Tour in August and his first top 10 finish in The D+D Real Czech Masters, Garrick continued his good form into Stage 1 of the European Tour Qualifying School at The Roxburghe, Kelso. Rounds of 71-68-69-71 (-9) saw him finish 6th and successfully move to Stage 2 in Spain in early November.

After his exploits he took some much needed down time to recharge his batteries. Now, he has added impetus to start working on his game again with an invite to the Alfred Dunhill Links Championship. This is one of the premier events on the European Tour and the tournament is played over the links of Carnoustie, Kings Barns and The Old Course, St Andrews and starts on 2nd October 2014. Once again, this will be great experience for Garrick playing in a star-studded field of professionals and celebrities.

Immediately following this tournament Garrick flies to America to compete in the Hamptons Invitational, New York. This will be a good opportunity to sharpen his game ahead of the Web.com Tour Stage 1 qualifying which takes place from 14th October at Callaway Gardens (Mountain Course), Pine Mountain, Georgia.

Garrick’s first goal is to try and qualify for the European Tour in 2015 but golf is a tough business and he is keeping his options open with his venture to America. So far, 2014 has been very positive for Garrick and he will be doing all he can to ensure it ends on a high. 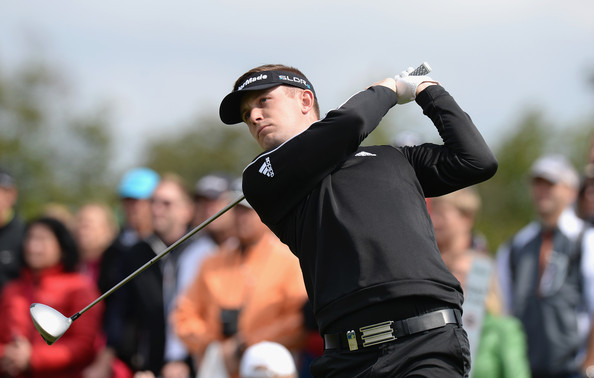 First Top 10 on the European Tour

Garrick Porteous achieved his first top 10 finish on the European Tour by finishing 9th in the D+D Real Czech Masters at the Albatross Golf resort near Prague. Garrick opened with rounds of 70-67 (-7) that meant he played in the second last group out in round three. He scored 72-73 (+1) at the weekend and dealt with the pressure and expectation very well. Garrick was delighted with his overall performance that clearly demonstrated his development and improvement this year.

The momentum had begun the week before at the Made In Denmark tournament near Aalborg. Garrick had started very promisingly shooting 72-69 (-3) in the first two rounds but high winds, tough conditions and playing with the local favourite Thomas Bjorn over the weekend saw him fade to 51st position. However, it was another cut made and invaluable experience gained over the weekend that will serve him well in future tournaments as demonstrated in Prague.

His reward for 9th place in Prague is an automatic spot in the 71° Open D’Italia at the Circolo Golf in Torino, Italy from 28-31st August. 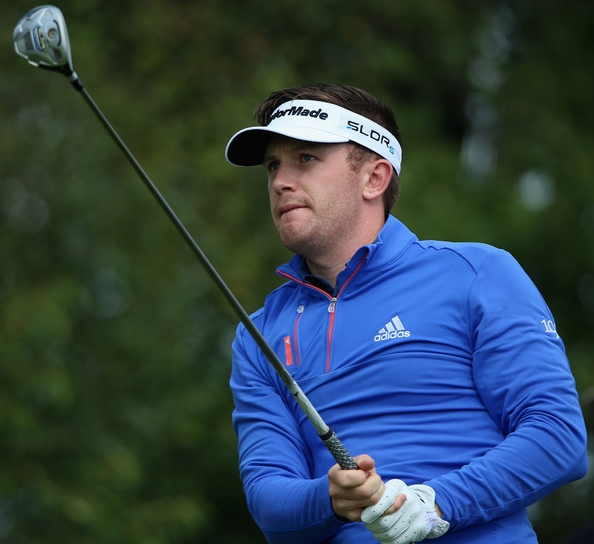 Positive news for Garrick is that he has been invited to play in Denmark on the full European tour next week 14-17th August 2014 at Himmerland Golf and Spa Resort, Aalborg, Denmark. Unfortunately, this means he will be unable to play on ‘home soil’ at Slaley on the Europro Tour.

Garrick is naturally very disappointed that he won’t be playing locally. However, this is a great opportunity to play on the full tour and further develop his golfing education. 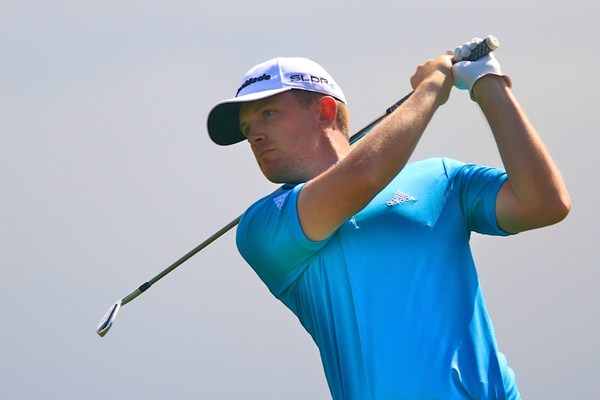 Garrick’s journey in the professional ranks have seen him compete on all three European tours this summer. His latest exploits have taken him to Switzerland in Europe and then to Azerbaijan in the Far East. Now he is back on home soil and is playing in three tournaments on the Europro Tour in England.

Garrick’s confidence is growing and his last two tournaments on the Challenge Tour have seen him make the cut on both occasions. Learning to make the cut and then play four rounds is providing great experience to the 2013 Amateur Champion. In Azerbaijan, he shot a career best seven under in round one to lead and maintained a place in the top 15 for the first three rounds before slipping to 35th. These are encouraging signs as he turns his attention to the Europro Tour for the next three weeks.

Garrick is at Moor Allerton in Leeds 6-8th August for the Clipper Logistic Championship. He then is really ‘at home’ when he plays The Break90 Classic on the Priestman course at Slaley 13-15th August before heading south to Princes, Sandwich 19-21st August for The World Poker Tour Invitational.

Garrick would be delighted to see some local support at Slaley to cheer him on. Full details, scoring and tee times will be available at Europro Tour. 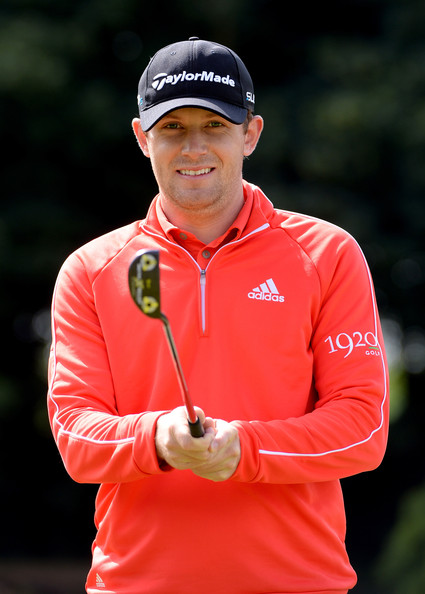 Garrick Porteous, the reigning Amateur Champion, won his maiden professional title at the PGA EuroPro Tour’s FSC Invitational at The Astbury, Shropshire. Garrick carded rounds of 66, 68 and 66 to finish the tournament on ten under par.

Standing on the 18th tee Garrick was aware that a birdie was required to tie the clubhouse lead. He coolly put a nine iron over the water to 12 feet and rolled in the putt. However, he still had an anxious wait whilst the field finished and confirmed a three man play-off.

In the play-off Garrick made par at the spectacular par-three 18th and then second time around he sealed his victory with a 15 foot birdie putt. Garrick was naturally delighted with his win. He said ‘It is great to get the first pro win. I made a slow start as a pro, missing a few cuts, but coming here and winning feels great and builds up the confidence.’

Garrick was presented with the £10,000 winner’s cheque by KK Downing, founding member of British heavy metal band Judas Priest and designer of the stunning Shropshire venue. Further details can be found at EuroPro Tour and the event will be televised on Sky Sports on Tuesday 24th June 2014.

Garrick’s schedule continues at pace. Monday 16th June he attempts to qualify for the French Open and then it’s onto further European, Challenge and EuroPro tour invites. He is certainly ‘Living The Dream’ at the moment. 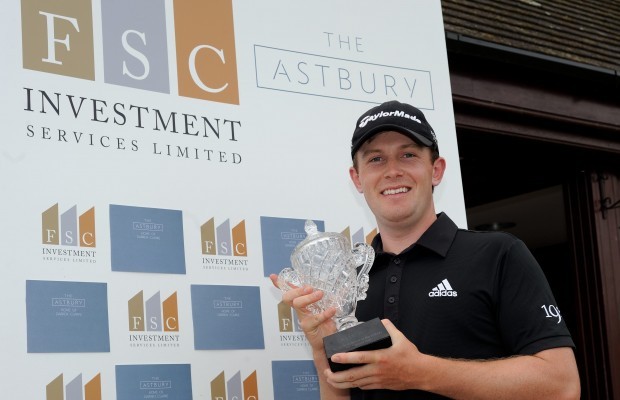 Early Experiences as a Professional

Garrick Porteous played his last event as an amateur at The Masters 2014 and signed off with a birdie. He turned professional the following day and headed to The Malaysian Open and then the Indonesian Masters. The first few months on tour have been a learning curve, adjusting to the travel, jet lag, the heat and humidity and playing with seasoned professionals.

Garrick is loving it and enjoying the challenge. Some early missed cuts have served notice that making the transition from elite amateur to touring professional take time. They have also made him realise that all aspects of his game have to be working really well and in particular his short game.

However, the belief and the confidence are growing. At Walton Heath on 26th May for US Open qualifying Garrick shot 70-71 to finish 17th and miss the play-off by one shot. This result perhaps created some momentum which helped Garrick then achieve his first cut as a professional at the Lyoness Open in Austria. He shot 74-69-72-73 to finish tied 32nd and gain his first pay cheque as a professional.

2014 was always going to be about making the most of his invitations and gaining experience as a professional. Exciting times and hard work lie ahead for Garrick, but he is in buoyant mood following his recent results and relishing the challenge of life on tour. 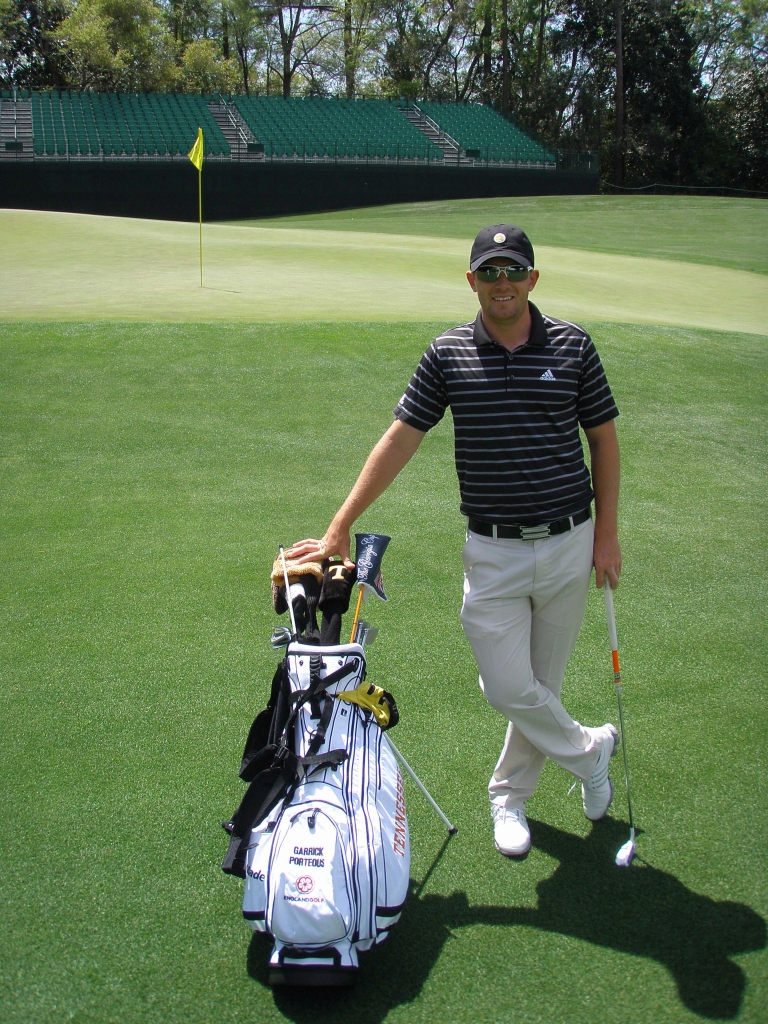 Garrick Porteous turned professional immediately following The Masters. He took the long flight from Atlanta to Kuala Lumpar with his caddie Michael Burrow to play in the Malaysian Open which starts on 17th April 2014. Garrick is excited for the new challenges that lie ahead.

ISM (International Sports Management) have also secured him an invite into the Indonesian Masters in Jakarta on 24th April and The Championship in Singapore on 1st May. It will be a busy few weeks in the Far East for Garrick but a great opportunity to get his professional golf career underway. 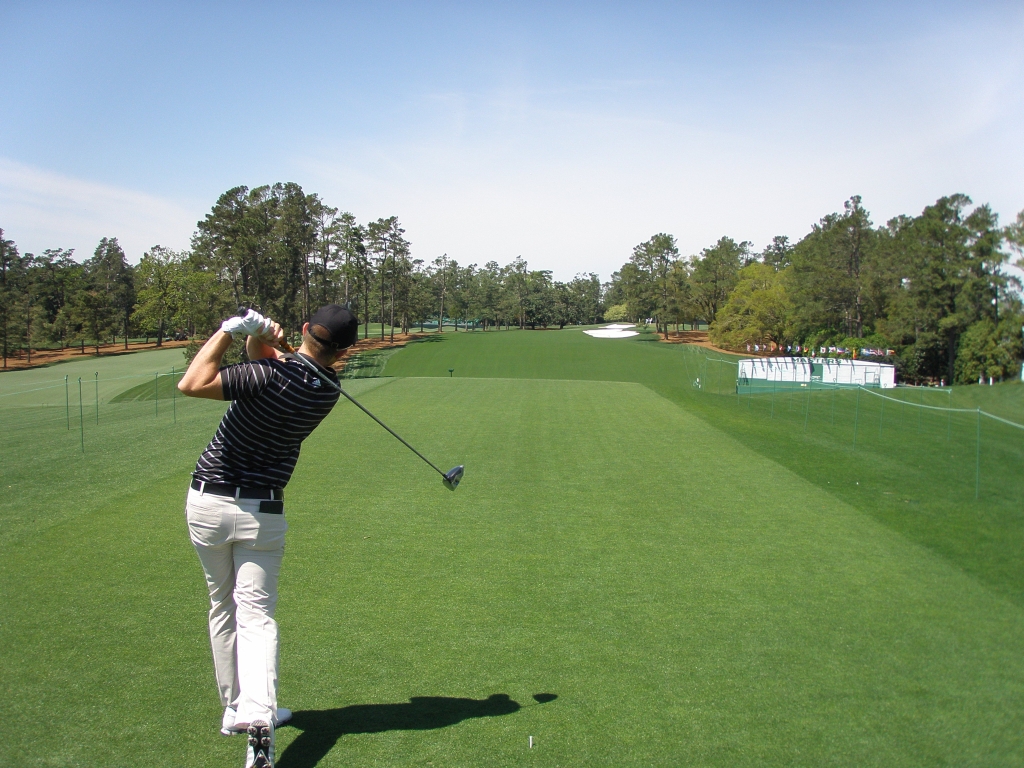 Garrick Porteous signed off his amateur career by playing in The Masters at Augusta National Golf Club. His Master's experience was wonderful and memorable.

He prepared the week before at The Golf Club of Georgia where he played The Georgia Cup Match (US Amateur - Matt Fitzpatrick versus British Amateur Champion) and won 3&2. The greens were very fast and enabled Garrick to attune ahead of The Masters.

One of Garrick's highlights at The Masters was the day before the tournament started where he played in the traditional par 3 competition. To play with Mark O'Meara (former Masters Champion) was a great privilege and experience in front of forty thousand patrons. The atmosphere was electric and he played well with 5 birdies in 7 holes, eventually signing for a 1 under par total to finish tied 14th.

The tournament itself lived up to all expectations and to play alongside Jose Maria Olazabal (Twice Masters Champion) and Lucas Glover (US Open Champion) was awesome. He loved every moment even though things didn't always go as he wanted. He learnt that on this golf course you have to put the ball in the exact spot and putt extremely well. He was disappointed not to make the cut but elated he bowed out his amateur career at The Masters and with a birdie on the 18th hole. 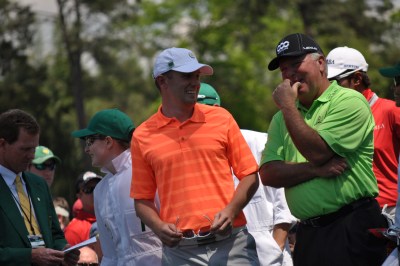 Garrick Porteous is getting close to bringing down the curtain on his glittering amateur career. There are only a few weeks left before he plays in The Masters at Augusta National on the 10th April 2014. This will be his final event as an amateur and what a fitting finale it will be as he heads into the professional ranks.

Prior to The Masters Garrick will be in Morocco (18-25th March) for an England training camp to fine tune his game. He will then head to the Golf Club of Georgia, Atlanta to compete in the Georgia Cup which is an annual match between the British Amateur Champion and the US Amateur Champion. For the first time since its inception in 1998 there will be a match between two Englishman. Garrick will play Matthew Fitzpatrick for the coveted title on 2nd April 2014.

There will be no time to reflect on The Masters as Garrick’s first professional event will be the Malaysian Open on the European Tour starting on 24th April 2014. He hopes to secure further invites in the Far East in the subsequent weeks to follow this event. 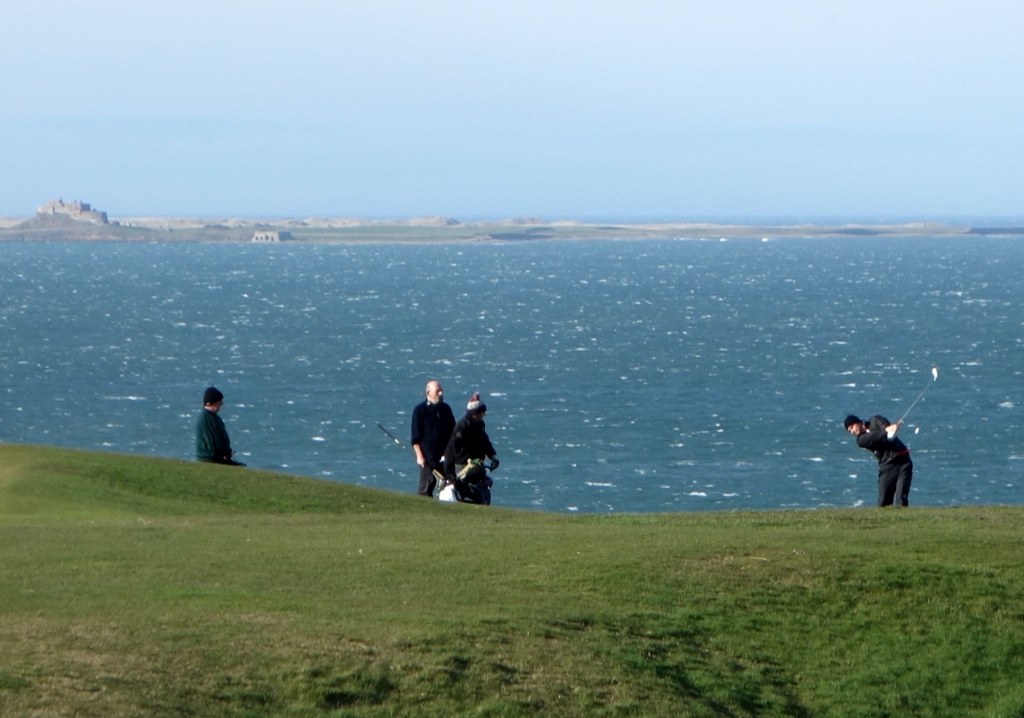 Garrick Porteous collected another award in recognition of his superb 2013 season. At the BBC North East Sports Awards held at the Billingham Forum on 5th February 2014 he received the Performance of the Year Award for his outstanding win at The British Amateur Championship. Interviewed by Alistair Brownlee from Radio Tees at the awards ceremony Garrick commented that he was delighted to receive the award and be recognised for his 2013 achievement.

One of his rewards for winning the Amateur Championship is to play in the first major of the year. The Masters is held at the famous Augusta golf course in Georgia from 10-13th April 2014. In preparing for Augusta he has been selected in England’s four man team to defend the European Nations Championship at Real Club de Golf, Sotogrande, 5-8th March 2014. This will be followed by warm weather training in Morocco with the England elite squad to sharpen his game ahead of The Masters. 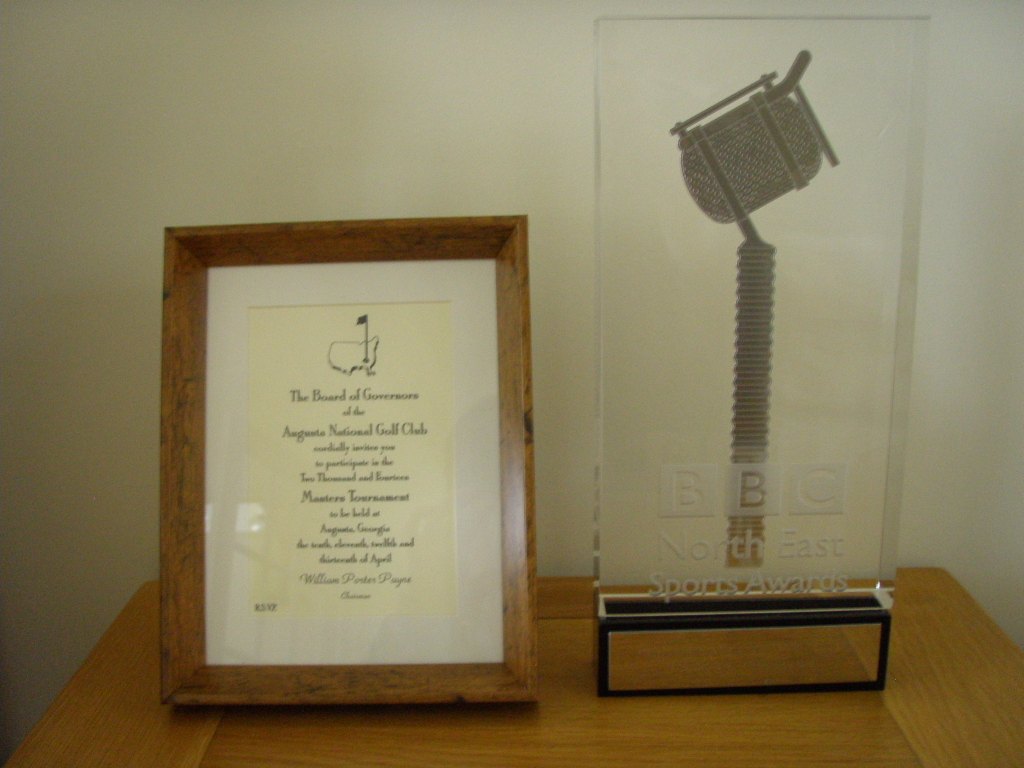